Duck Town, Turtle Town, and a Road That's Shut Down

"Ya'll headed to Duck Town or Turtle Town? 'Cause the road up ahead done been shut down".

That was the first conversation we had with a North Carolinian upon our ride into North Carolina as we embarked on our first adventure into Carolina Time. At that moment, Dan and I both looked at each other wide eyed and confused.  We had one of those moments where we thought we were not experiencing real life.

The man continued to give us directions as there was a mudslide ahead that did in fact shut down the road on route to Bryson City, North Carolina.  As he gave us directions, I'm still pondering what the hell is this man talking about? Are Duck Town and Turtle Town real places?  Dan was trying to not laugh and looked like he was listening intently to the directions given.

The memory is so vivid and was so unreal, we both remember it like it was yesterday.

Roscoe and his red beard looked right at us, speaking in a thick southern back woods drawl, "Ya'll are gonna wanna take the 4-11 to the 68, keep on heading south, cross on over at the border, take a left over the hill, make a turn just past the divide and you should be on your way"... he then did the stereo typical pat the car on the hood like it was a horse ready for the race. 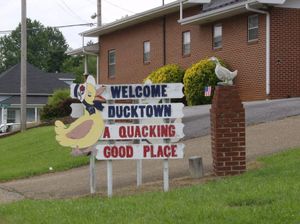 It wasn't that day that we found Duck Town and Turtle town, well, maybe not.  Truth be told we probably did drive through Duck Town, Turtle Town, Dog Town.  We were enticed and knew we had to dig deeper into that one.  We knew these places would be memorable!

Ducktown, The Copper Basin, along side the Ocoee River, about 30 miles away from the North Carolina border.

Turtletown, is a mere seven miles north of Ducktown, you'd probably miss it if you sneezed driving through.

Dogtown, another few miles away, sits just on the outskirts of the Cherokee National Forest.

Why did we write a song about the smallest towns we could possibly find in Tennessee? Because we pretty much had to!

Upon further research we found all three of these towns were named for their parts in a Cherokee village at the site prior to settlement in the 1840s.

Ducktown's population today remains less than 500 with a thriving farming community in the mountains.

Turtletown's borders, however, in the eyes of some are disputed. According to one, parts of it are known as Dogtown, which appears on a few local maps. However, to others, it is simply all Turtletown and Dogtown does not exist.   And now you will understand why we say Dogtown was the talk of the town back in the day.

Small towns are known for their charm and history.  These small towns were on the way to one of our biggest adventures, led us to Carolina time!

"We were pushing horses down 129, making our way to Carolina Time" 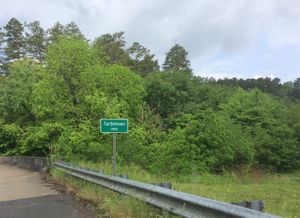 ... you'll just have to listen to the song to hear the rest of the story!